My name is Gabriella Pratt, and I am a 17-year-old with idiopat 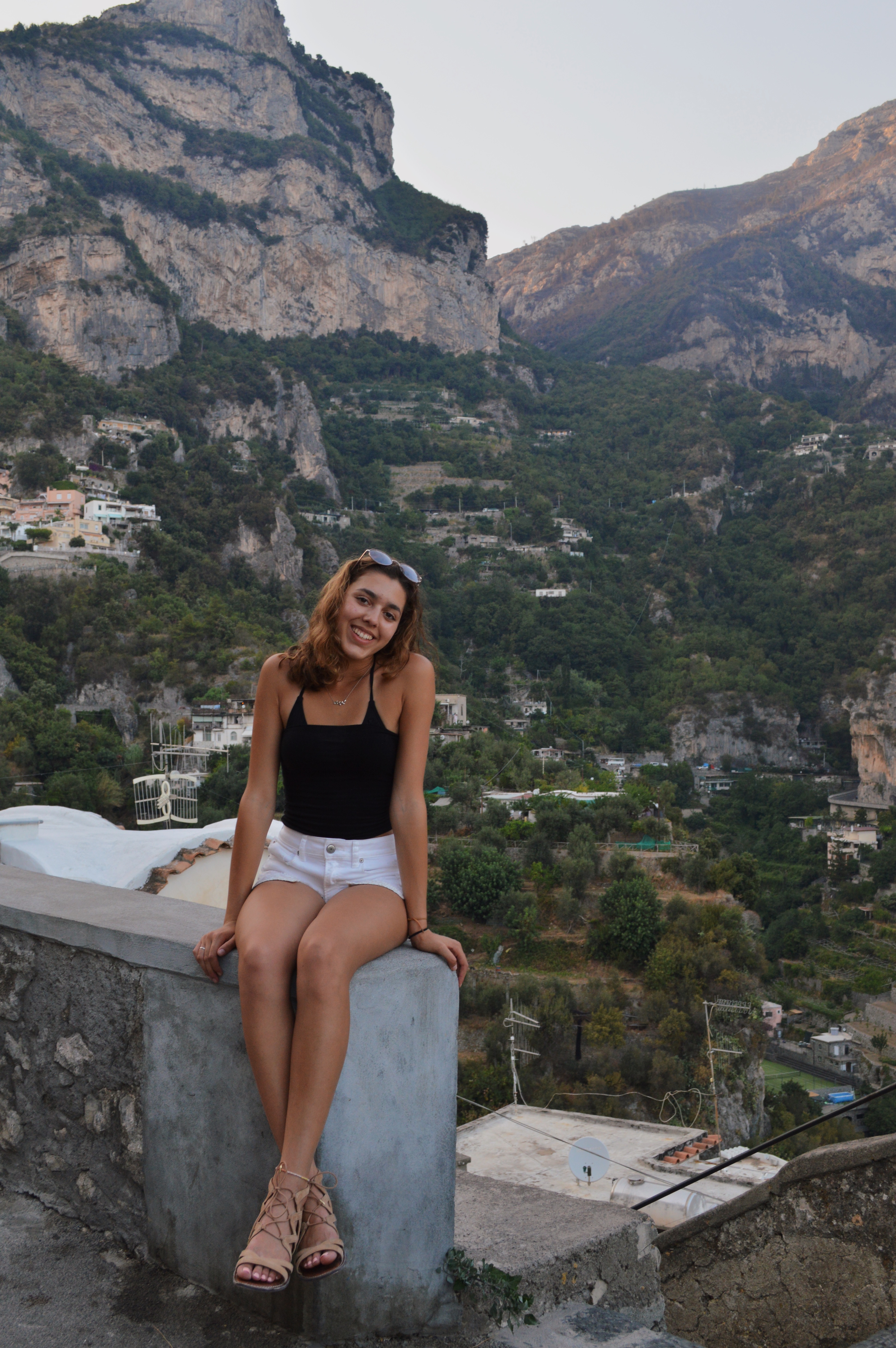 hic scoliosis. Scoliosis is a condition that causes a curvature or a rotation of the spine. “Idiopathic” means that the actual cause of the scoliosis is not known for sure.

I was diagnosed with scoliosis in fifth grade and have tried several methods of treatment to prevent further progression of the curve. When I first found out that I had scoliosis, I didn’t know how to react. I had heard stories about girls who had grown up with this condition, but I didn’t know how it would affect me and my life. Thinking about what could happen to my back worried me, and I was filled with uncertainty about myself. After several trips to Seattle Children’s Hospital, and numerous x-rays of my back to monitor my curve, my doctor decided it would be beneficial for me to start wearing a brace. At that moment, all I could think about was how my life at school and my tennis life would be affected by this new “thing” I had to wear around my torso.

The nurse took my measurements to fit me to the brace that I would be wearing for the next three years. Once I had been fitted, the doctors brought me a brace which was known as the SpineCor Dynamic Corrective Brace. It was a soft brace which was supposed to relieve both pain and stress from my back while at the same time preventing my curve from worsening. However, despite the significant amount of time I spent wearing the brace, 20 hours a day and seven days per week, my curve continued to progress.

I was scheduled to return for follow-up with my doctor at Seattle Children’s after a month trial of wearing the soft brace, at which time I was no longer measured at 25 degrees, but rather 45 degrees!  At this point, I was feeling doubtful and frustrated about the methods that I had previously tried. When my family and I went back to the doctor’s office to discuss what we would do moving forwards, the doctor said that I could continue with the SpineCor Brace, but that most likely, I would require surgery because my curve had progressed to a critical degree in-spite of wearing the soft brace as directed. 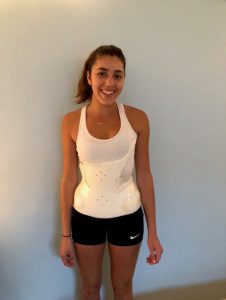 the proper alignment, leaving a long scar down the middle of my back.  I didn’t know much else about the surgical treatment for scoliosis, but he explained that there would be risks of complications which were “rare but possible”.  He also stated that recovery could take up to a year, and that I could not play sports for several months. Even when fully healed, I would not have the normal flexibility of my spine due to the rigidity of the metal rods Since tennis was my outlet and practice was something I looked forward to every single day, I didn’t want it to be affected by scoliosis nor did I want to stop playing.  At this point in time, I wasn’t willing to give up on my non-surgical treatment options.

After examining me and viewing my x-rays, Dr. Hresko stated that he felt I was still a candidate for a trial of non-surgical treatment.  He suggested that I switch to wearing a Boston Brace and begin a physical therapy program called the Schroth Method.

The Boston Brace is a rigid brace which was developed in Boston by doctors at Boston Children’s Hospital and is designed to stop curve progression primarily in adolescents with idiopathic scoliosis.

Gail O’Mara is the prosthetic orthotist in Boston that initially helped make my Boston Brace and then painstakingly adjusted it to get just the right fit.  As a result, my brace was quite comfortable and thus I was able to consistently wear it about 20 hours per day.  However, the stiffness and bulkiness of this new brace was something that took a while to get used to.

Before wearing the Boston Brace, I had grown accustomed to wearing fitted clothing like leggings, skinny jeans, and tank tops, all items that would reveal my new back brace. To cover up my brace, I changed my style. I had to wear more loosely fitted tops that covered the entirety of the brace, and pants that would fit on top of the brace, but I managed to keep it hidden.

The Schroth Method is a non-surgical treatment for scoliosis consisting of physical therapy which involves performing repetitive exercises that are designed to help strengthen the congenitally weak muscles around the spine.  Eventually, this makes it possible to maintain a more normal posture with the spine straighter and with less rotation of the chest.

I was intrigued by the description of the Schroth Method, but as I researched, I didn’t find much information proving it to be effective. However, the idea behind this type of treatment seemed to make sense, and I wanted to give it a try.

Though there are few Schroth-trained therapists in Washington, I was lucky enough to have one in my home town, at the Bellevue location of Seattle Children’s! When I was introduced to Shannon Stone Cribby, the physical therapist at Seattle Children’s, I immediately connected with her style of teaching. Each week I attended a Schroth appointment, and five days a week I did the exercises at home on my own. After several months of doing Schroth both at home and Seattle Children’s, my curve improved. I felt better about myself, and the improvement in the rotation and curvature of my back was noticeable. Shannon taught me how to hold a corrected position so that my spine was almost completely straight, and how to breathe to de-rotate my rib cage. I am so grateful for her help and patience because it truly made a difference. 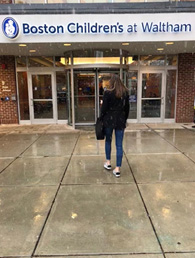 About every 6 months, my family and I traveled to Boston for a follow-up with Dr. Hresko and to have my brace adjusted. My first follow-up visit to Boston Children’s was disappointing because there was no significant change in my Cobb angle, meaning that my scoliosis had not yet improved.  Dr. Hresko reassured me and told me that he was happy that I was wearing my brace more than 20 hours per day.  He encouraged me to continue with my Schroth exercises and reminded me that it takes time for the muscles around my spine to strengthen.

The next time I returned to Boston, Dr. Hresko delivered the most amazing news! He showed me my x-rays and told me that my curve had improved from 46 degrees to 28 degrees!!

By the time I reached the 10th grade, after wearing the brace for three years, Dr. Hresko began to decrease the amount of time I needed to spend wearing it. Slowly, the muscles surrounding my spine strengthened, and I was able to hold my corrections without the help of the brace.

After being out of my brace for 6 months, I returned to Boston for my final visit to see Dr. Hresko in 2018 when I was 16 years old.  This visit was the best of them all beca

use my x-ray showed that I had maintained my curve at 28 degrees and because my growth was pretty much completed, I would not need to have surgery!

Ever since I received that wonderful news, I have been thankful for the Boston Brace and Schroth and amazed at the progress I have made because of them. I continue to do my Schroth exercises each day, and hope that my story will inspire others to try this treatment, because it really can make a difference.

WHY I STARTED A NONPROFIT

I started Spine-Aline in hopes that by sharing my story, I might be able to inspire other kids to give the Schroth Method and bracing a try as an alternative to traditional surgical straightening of the spine. The mission of Spine-Aline is to spread awareness about the noninvasive treatments available for children and adolescents with idiopathic scoliosis. It focuses on the Schroth Method of physical therapy and aims to encourage individuals to incorporate this therapy into their treatment. The more success stories that are available to parents and adolescents, the easier it is to appreciate the positive impact Schroth has on the lives of adolescents and girls like me. I believe that if the effectiveness of the Schroth Method is more widely recognized by patients with scoliosis in the United States and across the world, fewer of these patients will be required to have surgery, and adolescents could learn to stop the progression of their curves on their own.